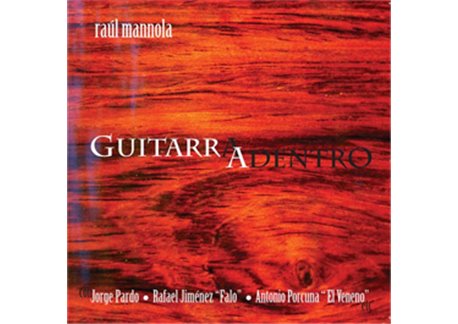 This record is dedicated to the memory of "El Chato de la Isla" and Ramón de Algeciras, who were "responsible" for my falling in love with Flamenco.

The contents of this record can be divided in two parts in two different ways.

First: Half of the 10 pieces that are included in this work, have the "cante" (traditional flamenco songs) as a starting point (La Milonga and Los Tangos), or as a culmination (La Soleá, La Minera and la Taranta). The other half consists of guitar solos, which, as in the case of La Seguiriya and Los Abandolaos, only have some percussion accompaniment.

Secondly: Half of the 10 participating musicians are of Spanish nationality, coming from different parts of the country: Oviedo, Madrid, Alicante or Córdoba. The other half is of other nationalities, from different countries like Argentina, Turkey, Scotland, Russia or Finland. Everyone feeling and experiencing the flamenco in their own manner. OUR FLAMENCO.

As singers we have first our friend "Falo" (Los Corales). Rafael Jiménez, a gipsy from Oviedo (Asturias) is a gentleman of the old school, when the most valuable thing a man could have was his word, his honor and sincerity. A really charming person, and a great specialist of the flamenco tradition. He has a very personal voice, a wide register, and profound and ashtonishing technique.

Antonio Porcuna "El Veneno" is another important person in my career as flamenco guitarist. A profound and orthodox singer, sensitive and wise, from Adamuz, a village in the Cordobean Sierra Morena, that from the days of "El Niño del Museo" has been the land of a surprising number of flamenco singers. It´s not in vain that he has been awarded the two national prizes from Córdoba, and the "Lámpara Minera" from La Unión.

The third "singer" appearing on this record is the flutist/saxofonist Jorge Pardo (Nenúfar), a great figure of the flute in flamenco, a flamenco-jazz pioneer with a large knowledge of these two different musical styles. Member for more than 15 years of the mythical sextet of Paco de Lucía. A much loved man for his way of being, delightful, sincere and very professional.

The fourth "singer" is the violoncellist Francisco Herrador. A musician with classical training, who demonstrates here his open attitude towards flamenco, (a quality not always present in Spanish classical musicians). Cello teacher in the Cordobean Professional and Superior Conservatories. He puts his musical sensibility in La Cartagenera clásica.

The flutist Juan Carlos Aracil, from Alicante, is the one who makes his flute sing in La Levantica (Guitarra Adentro). A man of human and artistic dimensions as few, makes grow all the pieces where he plays, in this record also Los Tangos.

The first of the guitar solos, "Para Guni", is a Rondeña composed 10 years ago for the funeral of my friend Gunilla Fabricius, a beloved person and a great "aficionada" of flamenco and horses.This is my homage to the memory of Guni. La Bulería "De Mi Corazón Blanco y Verde" is another "old song", recorded already in 1999 in my disc with the same name. I wanted to re-record it in a slightly different version. This piece is my homage to my "Second native country" Andalucía, and to Córdoba in particular.

In "Balik" as well as in La Milonga and La Taranta, it is, as far as I know, the first time that the 12-string guitar appears in flamenco music, at least as a protagonist. I was hesitating whether to put the generic name or not, but finally decided to do so, because the piece is based on the flamenco mode (Greek Dorian) all the way and the "compás" (rhythm) of the Seguiriya is present from the beginning to the end.

La Malagueña is not one of the most frequent nor grateful "palos" (flamenco genre) to compose as guitar solo. Here I think I´ve found a fresh tone of color, maintaining the aroma of the Malagueña. In the second part, Abandolaos, I let myself be carried away by spontaneity in improvisation. Just felt like saying: That´s it, with its mistakes and successes.