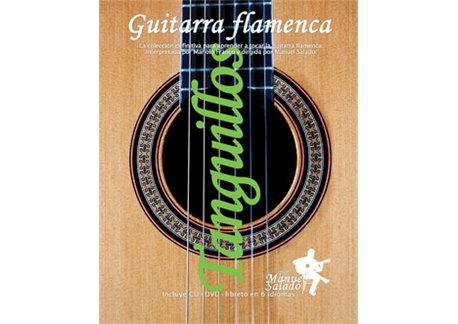 "Guitarra Flamenca" is a didactic guitar method that is exhaustive and tackles some key issues ranging from the posture of the tocaor (flamenco guitarist) to the transcription of the palos that are performed into musical score and guitar tab, while it also explains the meter, the tonality, the basic chords of the style that is being studied and the positioning of the capo.

Directed by Manuel Salado and performed by Manolo Franco, it looks at both the discipline of solo, or concert, guitar playing and guitar playing as vocal accompaniment, and it has been developed for all those wishing to get started in the world of the flamenco guitar, or who wish to improve and perfect their skills.

This volume is entirely devoted to the TANGUILLOS. It is composed by a DVD and a CD. In the DVD a complete version of a composition in this palo (flamenco form), for the solo guitar and vocal accompaniment alike. It also features the piece, broken up into falsetas (melodic phrases interspersed between successions of chords) and technique exercises. In the case of vocal accompaniment, students also have the option of listening to a version the piece without the guitar playing (so that they can accompany the singing themselves) and another version without singing (so that they may act as a second guitar).

The CD offers the complete version of the concert guitar and vocal accompaniment (with percussion) tracks. The following tracks feature the basic rhythm of the palo, with the guitar and percussion at slow speed, medium speed and fast speed. Afterwards, the basic rhythm returns, accompanied by percussion -without guitar playing-, again at three different speeds. All of these options give students different possibilities for practising with their guitar.

It also includes a bookled, in six languages, which contains a glossary of flamenco terms.

The music score is not on paper but are part of the DVD and can be read from the screen.